Comma Splice: What is it and how to avoid it? 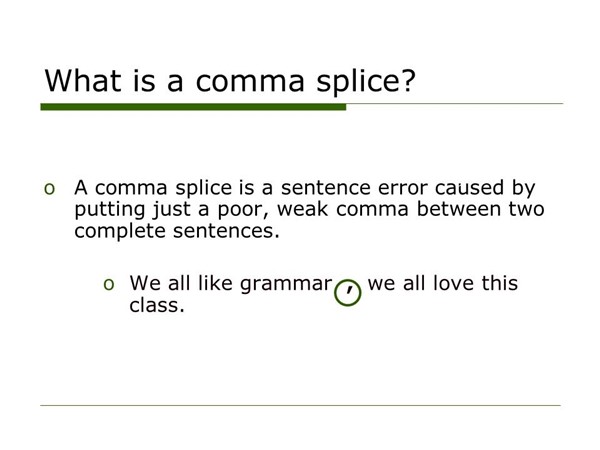 The comma splice is a common grammatical mistake employed by writers who are trying to link two related, but independent clauses, or distinct standalone sentences. It is generally incorrect for writers to  engineer this link by using a comma, rather than by employing one of the other options available such as inserting a semicolon, using a coordinating conjunction such as “but” or “nor”, or simply keeping each of the two clauses as a distinctly separate sentence.

The term “splice” is one with which most of us are familiar. “Splicing” sometimes refers to video or music, and more specifically the process of stringing together separate recordings into one continuous piece of content.  As this article discusses, the principal tool for undertaking sentence “splicing” is the “comma splice”.

When does comma splicing occur?

In order to fix instances in which a comma splice has been misused, we must first make sure the writer has in fact deployed an erroneous comma splice, and is not simply using the comma as it is meant to be used. Since the comma is one of the most prolific and useful punctuation tools, there are many grammatical scenarios in which it is properly used as a means of  extending a train of thought while avoiding a run on sentence.

So it’s important to make sure that we accurately call out the comma splice. One effective way to do this would be to examine the below examples of comma splices. .

I get distracted easily when I work from home, sometimes I am more productive.

The grocery store appears to be out of hand soap, they’re also out of canned vegetables.

As you can see in the sentences above, on either side of the comma there is a group of words called an independent clause which, in the absence of the comma, could actually stand alone as a complete sentence. The front portion of the sentence is clearly related to the latter portion, given that they both refer to the circumstances around working from home in the first instance, and grocery store stock outs in the second. However, as we are learning, it is incorrect to fuse the two clauses together with a “comma splice” and express the two sentiments as two parts of the same sentence.

How do we fix sentences with a comma splice?

This of course begs the question – what IS the proper way to express two related thoughts without unnecessarily making a grammatical error? There are actually a few options that would correctly accomplish what the comma splice attempts. Let’s explore those below.

The first weapon in your grammatical arsenal is the powerful and yet oft misunderstood semi-colon. It’s a shame the semi- colon doesn’t get nearly as much notoriety as the comma, especially since there are so many occasions where it ought to be used in place of the comma!  Let us revisit one of the sentences used as an example above in order to illustrate this point:

I get distracted easily when I work from home; sometimes I am more productive.

As you can see, the solution is quite simple. We have replaced the offending punctuation mark ( the comma) with a semi-colon and fixed the problem without having to make any changes to the actual content of the sentence. The text flows the same, you avoid a run-on sentence, and most importantly, you have not committed any offenses to English grammar.

Let’s see how this solution applies to another sentence – the second of our original examples.

The grocery store appears to be out of hand soap; they’re also out of canned vegetables.

As you can see above,  we have taken the same action – replace the comma with a semicolon and now you have correctly linked the clauses.

Use a coordinating conjunction

For the specific sentence that we have been working with, it seems the most appropriate coordinating conjunction to put to use would be “but”. Let’s give it a try.

I get distracted easily when I work from home, but sometimes I am more productive.

In this instance, you can see we have kept the comma in place, but we’ve inserted an additional word in order to fix the sentence. By placing the word “but” immediately after the comma, we succeed in correcting this sentence to make it grammatically correct.

The grocery store appears to be out of hand soap, and they’re also out of canned vegetables.

In the example above you will notice that we have kept the comma, we have eschewed the semicolon, and have inserted the word “and”.  Both the sentence and the conjunction we selected are different, but the outcome is the same. We now have a sentence that is almost completely unchanged in terms of content, but is now free of grammatical mistakes.

If you are apprehensive about semicolons and loathe to insert one of the coordinating conjunctions into your sentence, you may take great comfort in knowing that a third option is available to you. You may actually separate the two independent clauses into their own sentences.  Let’s see how that would look using our two examples.

I get distracted easily when I work from home. Sometimes I am more productive.

The grocery store appears to be out of hand soap.  They’re also out of canned vegetables.

As you can see, in both instances, we opted not to fuse together the two clauses using semicolons or conjunctions, and certainly not by getting anywhere near the now discredited comma splice. What we did instead was insert a period in such a way as to make each of the clauses in both sentences their own stand alone sentence. While this tactic may on occasion lead to more terse writing, it is grammatically correct.

Of the three remedies discussed, certainly the separation of the sentence into two shorter sentences has a more noticeable effect in terms of her sentence content. It is understandable that a writer, especially one with a penchant for longer sentence structure, might not want to alter the flow of their prose. That said, the sentence separation option remains an option and is of course preferable to the comma splice.

The Meaning of XD: What It Is and How To Use It

The Meaning of TTM: What It Is and How To Use It

The Meaning of TMI: What It Is and How To Use It

The Meaning of Sicario: What It Is and How To Use It